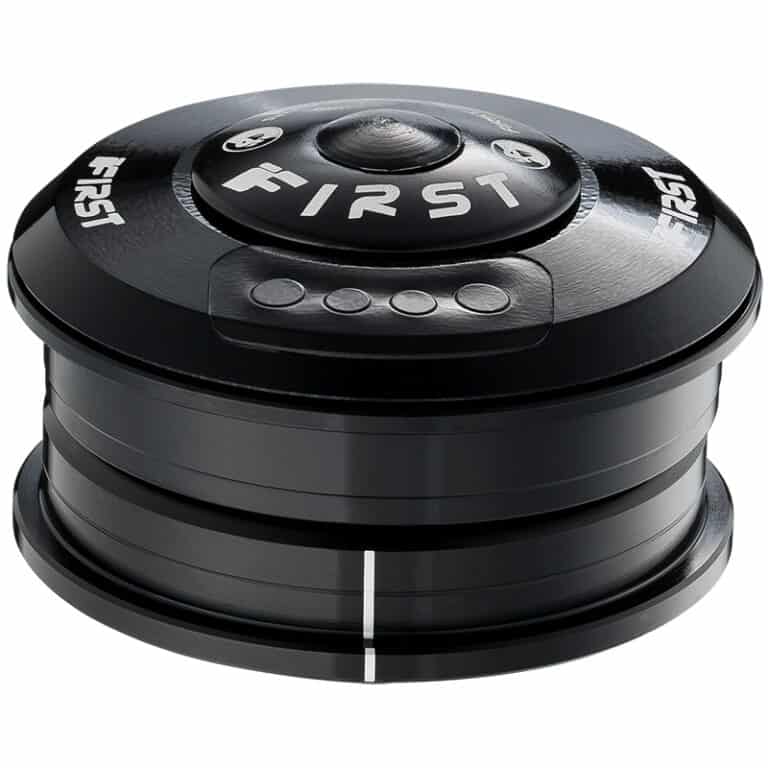 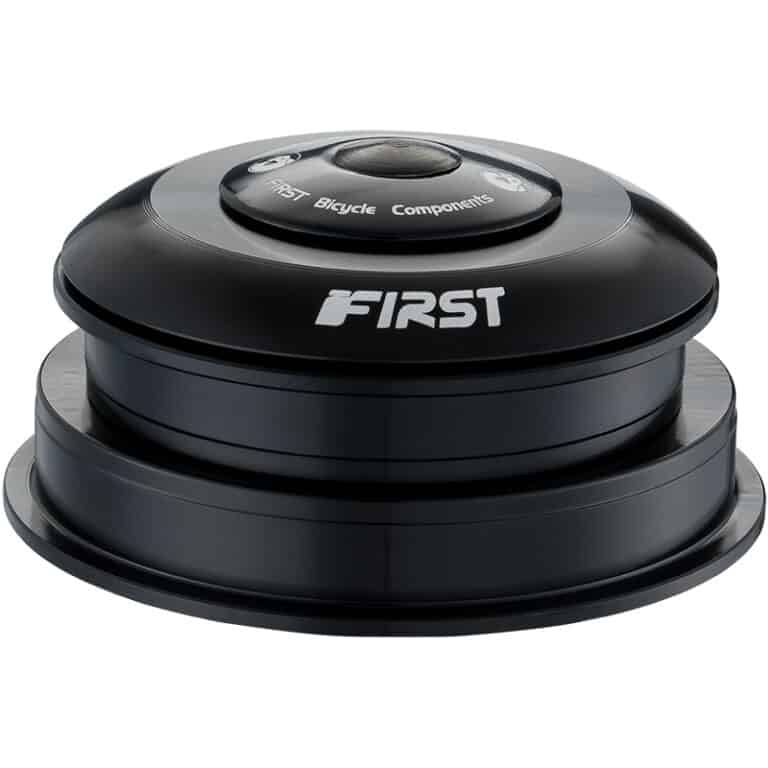 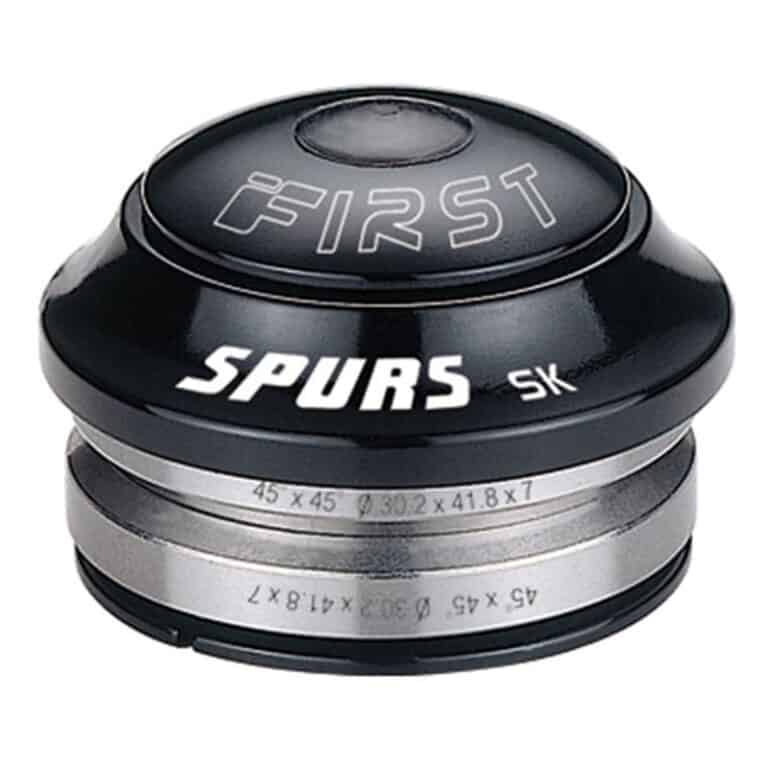 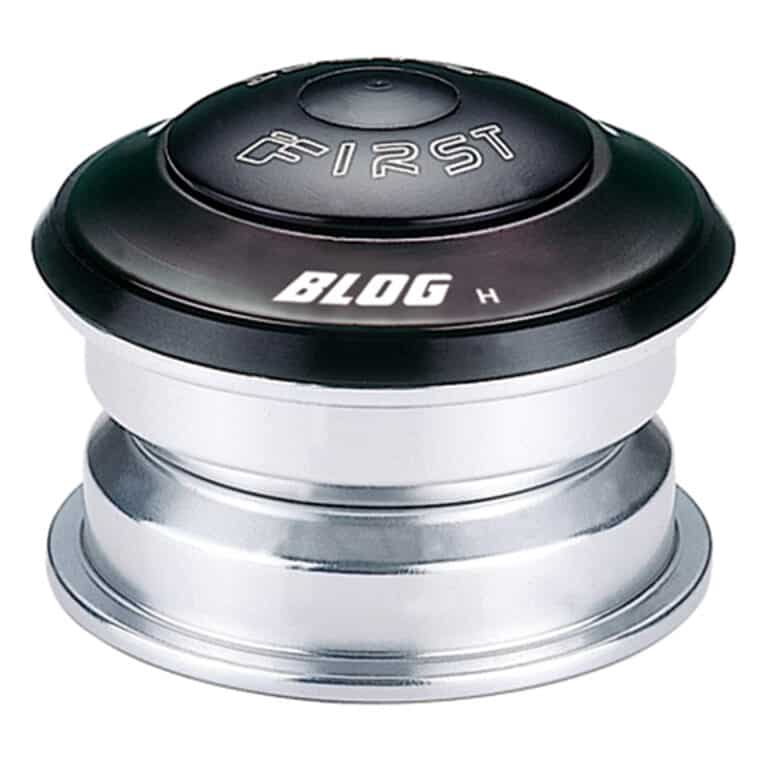 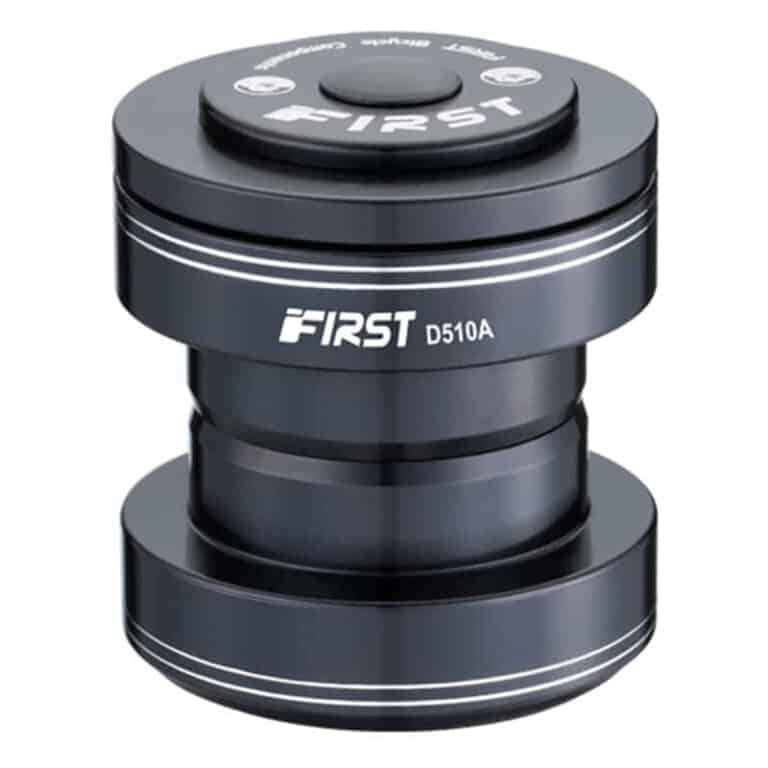 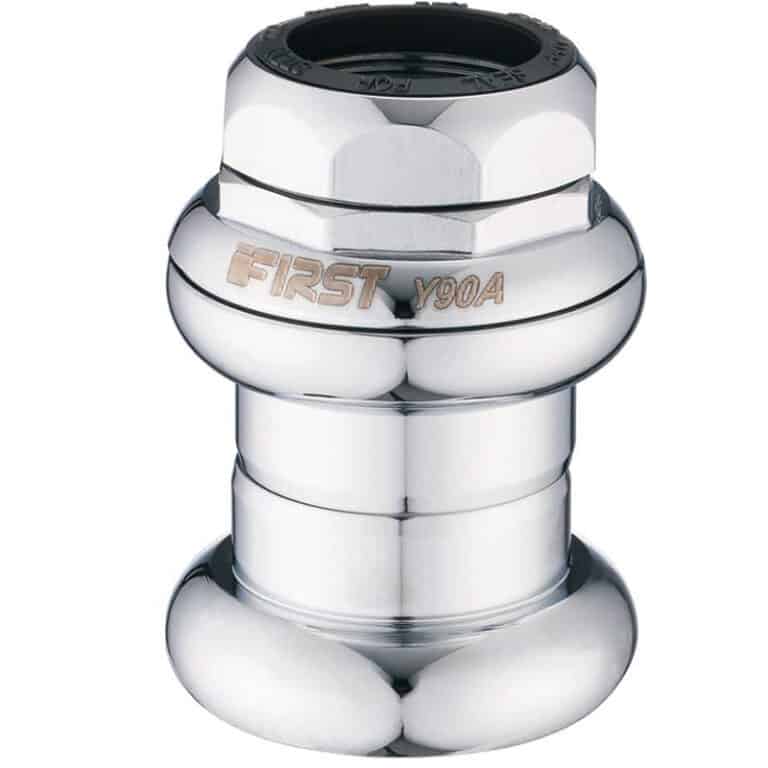 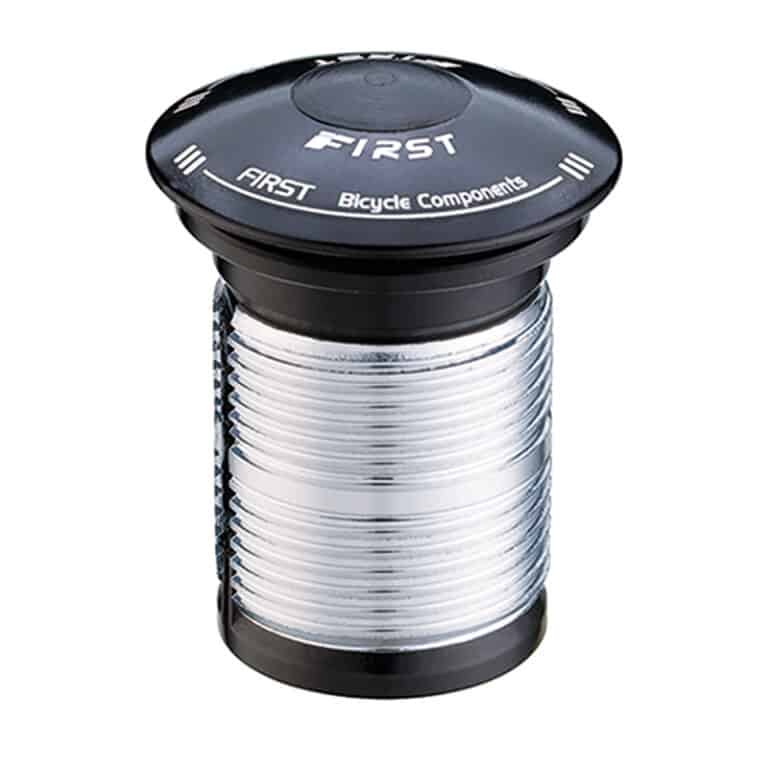 A bike’s headset is just a large set of bearings enabling a bike’s fork steerer to rotate inside the frame’s head tube. There are several parts making up a headset the most important of which are the two large bearings, one for each end of the head tube. In addition to these there are a collection of cups and spacers which seat them inside the headtube.

Disciplines such as mountain biking and cyclocross place heavy demands on a bike’s headset. Mountain bikes take a lot of punishment with every impact transmitted from the front wheel, through the forks and right through the headset. And then there is the dirt from muddy riding conditions as well as the chemicals from degreasers and bike washing chemicals that can make it past the tightest of seals in time.

The best headset is one that you can just install into your bike’s headtube and not have to think about for a very long time. First headsets are designed to keep out dirt and water as well as staying lubricated for the duration of the installation.

These are designed to be used with tapered head tubes. A tapered head tube is simply one which has a larger diameter at the base compared with the top. The taper makes it possible to install a larger lower bearing while keeping the upper bearing smaller.

The lower bearing gets most of the load it carries all the weight applied to the headtube which is transmitted to the fork. The upper bearing is mostly subject to side forces such as cornering and braking that have the effect of “bending” the fork, or would if the fork’s material allowed this.

It also affords increased contact between steerer and crown. The whole area is much beefier. This means a much more resistant joint which then enables the use of a longer travel fork that does not need an upper crown. The end result is a more “aggressive” front end, without adding too much weight. Fork manufacturers are also able to craft one-piece forks, where the whole fork is laid up in one continuous section. That’s more efficient for them and cuts the manufacturing cost.

The fundamental aim of this design is to provide greater bicycle stability and handling. The tapered fork, in concert with the tapered headset, delivers this very outcome nicely, although some riders argue that this is as much a marketing gimmick as a real technical innovation. The consensus of opinion is that, all things being equal—there are many variables that influence bike handling—the advantage is most certainly real.

In a previous stage of bicycle design all steerer tubes—that part of the fork that extends through the bike’s head tube—had a thread cut into them. Headsets screwed onto the thread on the steerer tube. These threaded steerer tubes commonly had a 1 inch diameter, although some mountain bikes were designed and assembled with 1-1/8in and 1-1/4 inch threaded headsets before threadless headset designs became standard.

In the original design, bearing cups were pressed into the head tube. The upper cup bearings sat above the races; for the lower cups the bearings sat below the lower races. The upper bearing is threaded and is held in place by a threaded lock nut. Two special spanners are required to make any adjustments. You’ll be hard pressed (joke intended) to find threaded headsets on good quality bikes these days. You’ll mainly find them on cheaper, old and retro-style bikes.

Threadless headsets are also referred to as Aheadsets, appearing in some product catalogues under that title. “Aheadset” is actually a trademark of Dia-Compe—which you will know as Cane Creek. Steerers under the original design do are not threaded. They utilize bearing cups which are pressed into the top and the bottom of the head tube. The bearings sit externally.

A star nut, or “star-fangled” nut, if you prefer, is hammered into the steerer by means of a star-nut tool that allows seating the nut at the right depth and parallel to the steerer. This is the anchor point for the tensioner bolt which threads through the headset’s top cap into the star nut. Two or three Nm of torque is enough to pull the headset together and keep the assemblage together. This also has the effect of drawing the fork crown firmly against the lower bearing—everything fits tightly together. Of course, you need to use a headset that matches the steerer diameter, 1-1/8in being the most common size.

A semi-integrated headset is also known as an internal, Zero Stack or ZS headset. This type of headset functions in a very similar way to a threadless headset. The difference is that the cups that hold the bearings are pressed inside the frame. A lip extends out of the top and the bottom of the head tube with the steerer diameter measuring 1-1/8in. You adjust them through the top cap and tensioner bolt at the top of the steerer.

When considering an integrated headset, you need to think of it as part of a system—a bicycle frame, fork and bearing system. The goal of this system is to get rid of the headset cup that characterized headset design up until the creation of the integrated headset.

The question you might ask is what, then, has actually been “integrated” into the headtube by recourse to an integrated headset? Well, instead of being located inside pressed-in cups, the bearings now rest inside the frame instead. It seems like a lot of work, fuss and bother just to do away with two 12 gram headset cups from the front of your bike. An integrated headset gives a bike a nicer, smoother, more streamlined looking front end though.

An important advantage in using an integrated headset is that you do not have to use any special tools. To install a standard or internal headset into the head tube, you’ll need a headset press . This consists of a rod with a handle at one end. The rod threads through the head tube with the lower cup is seated on the lower end. The upper cup is seated on top with the handles rotated just above. As the tension increases, the cups are progressively pressed into the upper and lower edges of the head tube. The tool is expensive and not all that convenient to use, to say the least. Moreover, you will need a headset cup remover tool  and a hammer to tap out the cups come time to replace the system. Use a screwdriver by all means. However you will likely damage both the components being removed (maybe no big deal) and your headtube (definitely a big deal). All it takes is a slip of the screwdriver.

By contrast, the only tools you need to install or replace your integrated headset is an allen key/hex wrench (normally 5mm) to loosen the tensioner bolt and remove the top cap. Even if the bearings are firmly seated in the headtube, it won’t take long to remove them just using your fingers, although a bearing cup removal tool here is invaluable for bearings that stubbornly refuse to dislodge.

There is some debate about the degree of increased performance we gain by using the integrated headset design. Many feel that there is a reduction in performance and in the lifetime of this type of headset unit. The argument is that the bearing is not securely attached to the frame. The bearing thus sort of ‘floats’ freely which means movement, and where you have movement you have increased wear and tear—in short it’s not good for the frame and the longevity of the headset is reduced.

Another bone of contention is that each manufacturer comes up with slightly different designs and thus different spec. Without effective standardization up to the present moment what we have are a wide variety of bearing types and sizes. Additionally some of these have been discontinued with no replacement options. Frame builders and bearing makers are also not all working from the same drawings. That makes it a bit harder when sourcing replacement units or parts for those units.

A counter argument to this is that the movement or play that we are talking about here is not really significant. If an integrated headset is properly installed, then there may be a fraction fraction of a millimeter of play, which results in some minute wallowing of the head tube bore. There will be considerably more movement if these headsets are not installed and adjusted correctly. It is fair to say that for most riders and their bikes, the fractional wear that occurs in a properly adjusted headset is not an issue. Something else on the frame will go long before the bore is affected to the point where you can declare a frame compromised. The fact is that any headset that is not adjusted properly can damage a headset. This is not a case of the inherent weaknesses of the integrated headset vs all the rest.

Unique B2B insights from inside the Taiwan Bike Industry.